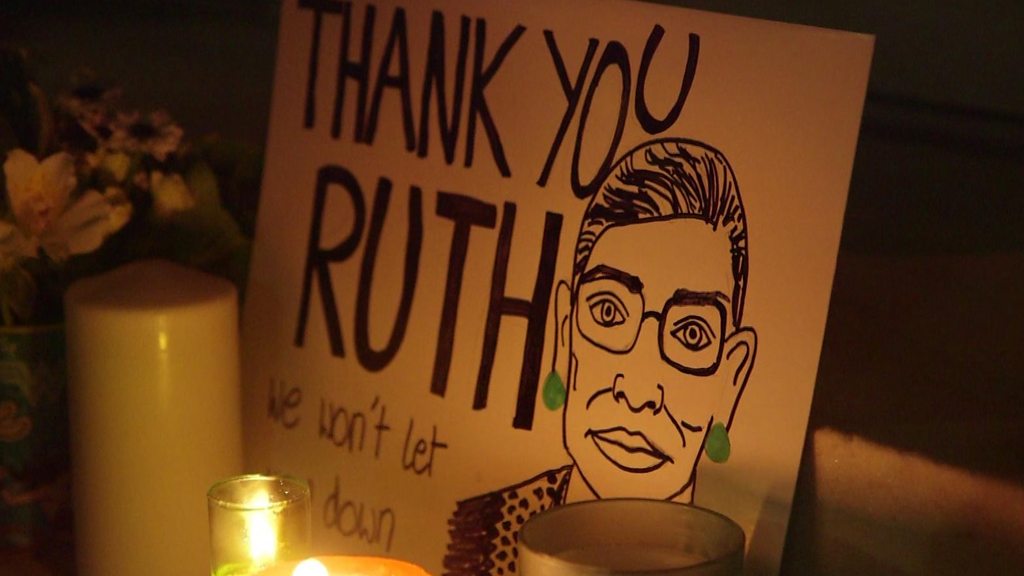 Mr Trump has said he will next week nominate a woman to replace the longstanding liberal justice.

Democrats fear Republicans will vote to lock in a decades-long conservative majority on the country’s highest court.

What has Biden said about Trump’s decision?

During a speech at the Constitutional Center in Philadelphia on Sunday, Mr Biden said the president had “made clear this is about power, pure and simple”.

“The United States constitution allows Americans the chance to be heard – and their voice should be heard… they should make it clear, they will not stand for this abuse of power,” he said.

“I appeal to those Senate Republicans – please follow your conscience, let the people speak, cool the flames that have been engulfing our country,” he said.

“Don’t vote to confirm anyone nominated under the circumstances President Trump and Senator McConnell created. Don’t go there.”

Two Republican senators, Lisa Murkowski and Susan Collins, have both backed a delay in the vote until after November’s presidential election.

If they are joined by two more Republican senators, they could block or at least delay a confirmation vote, as the Republicans have a majority of only six in the Senate.

In the event that the vote is a tie, the US constitution allows Vice-President Mike Pence to cast a tie-breaking vote.

To avoid that outcome, Mr McConnell is seeking to secure the support of Republican senators. He has already won the backing of Republican Senator Lamar Alexander, who was viewed as a potential swing vote.

On Sunday, Mr Alexander said the US Constitution “gives senators the power” to vote on a Supreme Court nomination, even during a presidential election year.

Mr Biden said that if he won the presidential election, Mr Trump’s nominee should be withdrawn. He said he would then consult senators from both parties before putting forward his choice.

He added that it would be wrong to release his list of potential Supreme Court nominees now, as this could expose some judges to political attacks.

But he said his first choice for the supreme court “will make history as the first African American woman on the court”.

What has Trump said about Ginsburg’s successor?

Mr Trump has vowed to swear in Ginsburg’s successor “without delay”.

“I think it should be a woman because I actually like women much more than men,” he said at a campaign rally in Fayetteville, North Carolina, on Saturday.

Earlier, Mr Trump praised two female judges who serve on federal courts of appeals as possible choices. Both judges – Amy Coney Barrett and Barbara Lagoa – are conservatives who would tip the balance of the Supreme Court in favour of Republicans.

Democrats have vigorously opposed any nomination before November’s election, arguing that Senate Republicans blocked Democratic President Barack Obama’s choice for the US top court in 2016.

At the time, Senate Majority Leader Mitch McConnell justified the move on grounds that it was an election year. But on Friday Senator McConnell said he intended to act on any nomination Mr Trump made and bring it to a vote in the Senate before election day.

The appointment of judges in the US is a political question which means the president gets to choose who is put forward. The Senate then votes to confirm – or reject – the choice.

Ginsburg, only the second-ever woman to sit on the Supreme Court, died of metastatic pancreatic cancer at her home in Washington DC, surrounded by her family.

Ginsburg, who served for 27 years, was one of only four liberals on the nine-seat bench. Her death means that, should the Republicans get the vote through, the balance of power would shift decisively towards the conservatives.

In a statement to her granddaughter, days before her death, Ginsburg expressed her “fervent wish” not to be replaced until a new president had taken office.

How have Americans been paying tribute to Ginsburg?

Displays of grief, appreciation and anxiety have been seen across the US, as the country reflects on Ginsburg’s groundbreaking legal career and the future direction of the Supreme Court.

Memorials attended by thousands of people nationwide this weekend have showed the esteem in which Ginsburg is held.

Supporters of the woman some affectionately called “The Notorious RBG” have been gathering outside the Supreme Court in Washington DC since Friday night. Visitors to the court have left flowers and signs in tribute, contributing to a makeshift vigil.

The Supreme Court said flags on its front plaza will be flown at half-mast for 30 days in honour of Ginsburg. In a statement on Sunday, the court said Ginsburg’s bench chair and the bench directly in front of it have also been draped in black wool crepe.

This, the court said, was done in accordance with a 147-year-old tradition for the death of a sitting justice.

What does the Supreme Court do?

The highest court in the US is often the final word on highly contentious laws, disputes between states and the federal government, and final appeals to stay executions.

In recent years, the court has expanded gay marriage to all 50 states, allowed for President Trump’s travel ban to be put in place, and delayed a US plan to cut carbon emissions while appeals went forward.

It is also deals with issues like reproductive rights – one of the main reasons some pro-life conservatives want to tip the balance away from liberals.

Who are seen as top contenders?