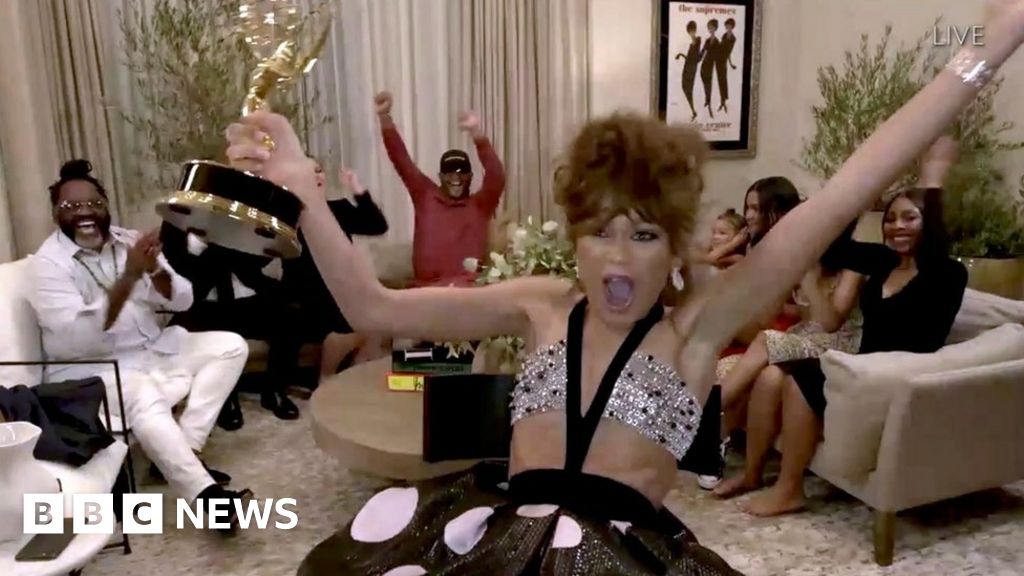 Former Disney Channel star Zendaya made history on Sunday, becoming the youngest woman to win best actress in a drama series at the Emmys.

The 24-year-old picked up the coveted prize for her portrayal of teenage drug addict Rue in HBO’s Euphoria.

That was no mean feat given her heavyweight competition.

“I know this feels like a really weird time to be celebrating,” she said at the virtual ceremony, surrounded by her family.

Zendaya’s win was well-received. Variety’s Caroline Framke wrote: “Though written with vicious precision by Sam Levinson, Rue’s only as effective as she is because Zendaya is so incredibly good at portraying her.

“The character could have been – and sometimes is – a mess of cliched teenaged angst. Instead, Zendaya digs into every corner of her gnarled psyche to find the terrified kid hiding in the shadows.”

She added: “Zendaya’s Rue becomes one of the most finely-tuned portrayal on television. It’s only right that the Academy recognized it as such.”

Euphoria role ‘very important to me’

The hard-hitting show made its UK debut just over a year ago, having whipped up a storm in the US with its graphic depictions of sex, self-harm and drug abuse.

Based on an Israeli series that first aired in 2012, Euphoria draws heavily on lead writer Sam Levinson’s own experiences of teenage addiction.

It follows the life of 17-year-old Rue, who is fresh out of rehab, and her high school friends.

Speaking backstage at the Emmys, Zendaya said: “For me, I’ve always been very grateful for all the people who connect to Rue or feel that, through the show, they are able to attach words or find themselves within a scene or a moment where they otherwise felt alone.

A second series has been commissioned, although there’s uncertainty over when it will hit screens due to delays in filming because of the coronavirus pandemic.

Zendaya also became only the second black actress to win her Emmy category after Viola Davis made the breakthrough in 2015 for How To Get Away With Murder.

There was an increase in the diversity of winners at this year’s awards, with 10 out of 19 performing categories won by black actors. They included Regina King and Yahya Abdul-Mateen II for Watchmen and Mrs America’s Uzo Aduba. Last year, that figure was two out of 19.

Zendaya has previously spoken about such issues as colourism, describing herself as the industry’s “acceptable version of a black girl” because she has lighter skin.

However, there were no Latin American or disabled nominees in the major categories.

Director and actor John Leguizamo said he was boycotting this year’s ceremony. “If you don’t have Latin people, there’s no reason for me to see it,” he said. “What’s the point?”

Onwards and upwards for Zendaya

Zendaya started out on Disney Channel shows like Shake It Up and KC Undercover and went on to star in two Spider-Man films and The Greatest Showman.

She’s set to star in another Spider-Man movie next year, reprising her role as MJ, and will also feature as fierce Freman fighter Chani in the hotly anticipated new adaptation of Frank Herbert’s novel Dune.

Actress Vivica A Fox recently said in an interview that she wants Zendaya to play her screen daughter in Quentin Tarantino’s Kill Bill 3. Zendaya said she was “honoured” but that it was just an “idea” at this stage.